I should note before launching into this that I figured it would be a while before posting again and that certainly was the case. Because of this I’m going to be clear about this upcoming series of blogs.

Over the summer I managed a fair amount of pre-production on my project. There is a very real skeleton for something I truly care about that’s ready to come into existence, but it’s going to take time that I can’t feasibly put into it to bring it to life. This is because my semester at Uni presented an enormous workload that left no room for free time. It’s a scope problem, and in order to solve it, I’m making something smaller that I plan on finishing and releasing before I finish my Bachelor’s in about 2 years.

This new project is something I’m calling “Atavism” right now. I haven’t got it copyrighted or anything but that’s what we’re going with at the moment. For the time being, I’m working on it alone. The reason I’m able to post progress at all right now is because I have a month of winter break and I’ve set myself on working a certain amount of hours per week. How has it gone so far?

Atavism is set to be an impressionist sort of first-person action game with a surreal bend to it, where the player’s environments and weapons progress through a loose analogy of history as they progress and absorb their journey in a fictional landscape. In the weeks leading up to week 1 I already did a bunch of the narrative brainstorming, encounter plotting, as well as weapon, item, and enemy lists and descriptions in a game design document in Onenote.

Forgive me if I’m sparse on the actual details, but pictures will generally speak more than words in a weekly blog. Week 1 began with porting over the engine progress from my previous project into a newer project in Unity 2017.2. In addition, I set up a trello to map out and track feature implementation and an excel sheet to manage my hours.

The most interesting stuff from week 1 includes two weapons. The spear and the knife. Both are things that I generally consider placeholders, as while I went through the effort to animate them roughly to the degree that I’m satisfied with, I plan on replacing the mesh for the arms, smoothing out the animation, and texturing them at a later point in development, so these are meant to serve for a little while.

I plan on giving this short, weird narrative game in my head an interesting amount of depth in two ways: One of them is a focus on AI depth and polish, and the other is through the agency of player weapons. While the latter is sure to constitute the progress for later devblogs for a while, I’m beginning with the player weapons.

Each weapon is set to have two “grips” that can be switched between with a mapped button. The spear, seen below, has a two handed mode as default with a shield (that the player will find after getting the spear) as the alternate grip. With two hands, the player must aim before attacking, but will have a good mount of reach, whereas the shield grip can attack without aiming for a regular range, but also attack while blocking damage, which has an even shorter range. In general, the weapon represents a safer, more accurate form of combat with more control and consideration in positioning. Here is a webm of it in action.

The player begins the game with the knife, which at the moment has only the first grip animated. The weapon is meant to be faster and more savage – with a wide hit detection – but the range is far shorter and the block doesn’t accomplish much. Here is a webm of it in action. 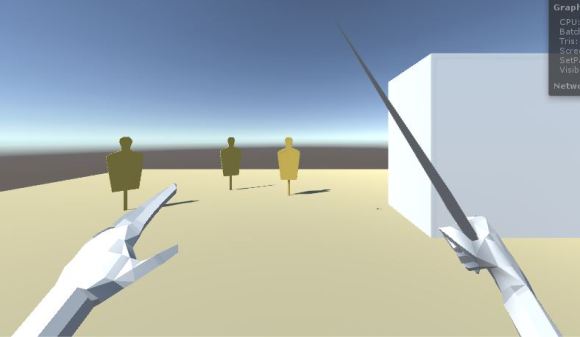 Besides these, which have taken most of the time of this week to make and implement, I’ve also developed a crude pause system and a fairly detailed weapon switching system, which is ready to switch between weapons mapped to the number keys or return to the player’s previous weapon when they hit Q.

Next week is Christmas. I won’t be working on Christmas day. Next week I’ll also be going on vacation with my family, so I won’t be working on Thursday or Friday either. I’ll try to work more on the days that I can to make up for it and publish a small devlog over what I accomplished anyways, but I can only guarantee that I’ll be working full weeks afterwards until the break is over. Until then, be entertained with this short webm where both weapons are enabled at once.