Bringer of Brilliance is a First Person Action game that I and two friends made during the 2018 K-State 48-hour Annual Game Jam, a jam hosted by my own college where we competed against about 17 other teams to make a game with the theme “enLIGHTen”. Armed with more experience and ambition than 2017, the development process was smoother and more productive, but ultimately far more intensive, but resulted in a good end product that won 3rd best overall. Download Link.

This marks the second time this team – Armchair Factory – has worked together, the last time being the 2017 game jam. The setup was the same; I was at the college and worked from my dorm room in Unity while my friends worked remotely. Tylar Rundquist worked on the knife and bow viewmodels, Leviathan enemy, and environment props while Jesi Armstrong did all the sound effects and music.

The game jam officially began at 5:00 pm on Friday, when we were give the theme – “enLIGHTen”. It’s an evocative theme to be sure, and probably my favorite of any jam game I’ve worked on, so after it was revealed I went to my dining hall with a notebook and pen to eat dinner and brainstorm.

I knew pretty much immediately what type of game I wanted – a First-Person action game where you wield a bow of light – and the initial draft PDF that I churned out isn’t that far off. I figured that literally, the theme of enlightening would relate to navigating a dark level as an avatar of light, destroying machines and collecting their cores into a light resource that you might dump somewhere to change the level somehow.

For the theme of the intellectual enlightenment, I figured an interesting narrative stage for this collection would be returning the light to an ancient AI in order to enhance or build his intelligence somehow and propel him to godhood. This is, of course, a pretty wide narrative ambition for the gamejam, but I knew that it would mostly manifest itself as a fast bow-shooting game with 3 levels that have an interim stage with the AI and a glowy door.

So soon after this idea document I sent the requisite sounds and models list to my friends and began to prototype the gameplay with placeholder block models. I modeled the Guardian myself (the floating projectile-shooter) and ended up implementing him first, which really laid out both the artistic direction of the game – with his stark, angry red shadows and metal dishes – as well as the gameplay, which consisted of hunting down these guardians for their light while avoiding the projectiles they shoot.

The first level really ended up being my favorite, despite the size of the others and how much time and effort they took to build. It was where I tested gameplay, and although the map was more haphazardly constructed than the other two, it has a nice loop structure to it and can be satisfying to just load up and beat due to how densely-packed and immediate it is.

During the creation of this map, we managed to finish and implement the viewmodels while Jesi added the music and I coded all of the AI for the enemies and light/health systems for the game in the rather intensive and rigorous phase of creating and debugging that marked most of the programming for the whole project. I’m certainly not proud of all the hastily-written source code lying underneath this thing, but I planned within my boundaries and executed everything I set out to do in a timely fashion, so I consider that a good success.

Finishing the map symbolizes roughly the entire first two-thirds of production. Where initially the placeholder blocks were still in use and only the Guardian and the Runt (the tiny walker) in basic implementation, the level guided us through the entire gameplay loop and cemented a vanilla example of what a map for this game would play, look, and sound like. 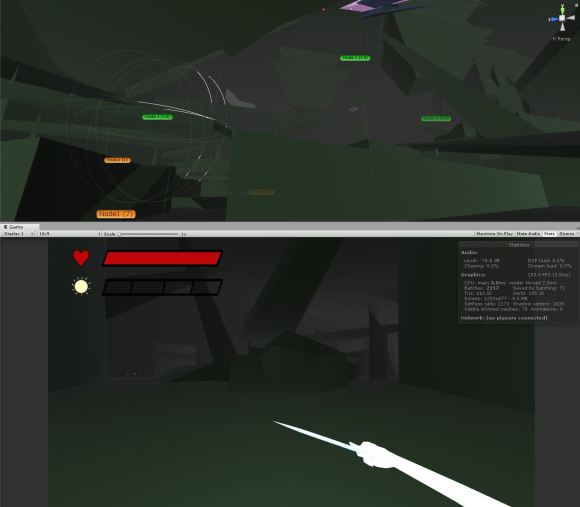 With a level in place and the systems intact, the last third of production was an intense scramble in figuring out the structure and making content. I made the second level into the wee hours of Sunday morning, by which was about the time Jesi had finished all of the sound in the game and Tylar was finished with all the critical models. I don’t have much to say on it other than that there’s a lot of empty space and even the stilted pillars around the airspace of the level don’t help much in giving you room to dodge incoming projectiles. I like how it looks, however, and I at least did something interesting with the room of 2 Leviathans set over a grill with Guardians below, which provides a neat minigame of risk vs. reward when the player considers traversing pacing the dangerous environment to get shots off at the chance for lots of light.

A short sleep provided almost no respite before I woke up and got to work on level 3. It’s the largest and the most prop-filled of the bunch, but it’s a third completely different style of map in the same game. Where the first was a small room where pacing and looping mattered and the second was a trial in sticking to cover and traversing spacious distances, this one is a massive maze that defies memorization and relies on split-second player-pathing decisions while subsisting long enough to hit the (in retrospect, far too high) light requirement to beat the game.

It’s not bad but it’s state during judging was far too long and tended to run slowly because I forgot to include Occlusion Culling. It also never quite captured the magic gameplay loop of the first that I like so much. In any case submissions were due at 3PM and I managed to pump this out after 3 hours and submit my game at 2:30 after baking the lighting and building the package.

In the end my game won 3rd Best Overall, much to our team’s celebration, as well as runner-up for Best Music and Best AI, which led to an interesting interaction between an AI professor and I. But what do I think about the production of Bringer of Brilliance and what would I do differently if I had to do it again?

In short, the development process of the game was extremely intense. While I planned for a game within the skills and time-conscious nature of the jam and we fulfilled the plan successfully, every waking moment of the 48 hours was pushing me to the absolute peak of my ability. Throughout the jam I don’t think I spent more than 10 hours doing anything that wasn’t actively making some aspect of the game, and most of it was eating and sleeping. I’m a bit concerned it was somewhat similar to the horror stories of terrible crunch that a lot of studios have had one time or another.

The whole time I was awake I was either making assets, writing the scripts, or feverishly building the levels in crunch – during all of which I would eat less and have almost no time that didn’t involve working on my computer. In short, I could have taken much better care of myself, and although I got a cool game and an award out of it, it took several days before I felt my condition returned to normal. I didn’t even really gain any skills, as most of my time was spent writing short-term programming work and putting together hastily-built levels.

What I learned was to absolutely not push myself as hard next time, to make a smaller project and allot more break time. About half of the judges never even got to the second level anyway, so a lot of my time was wasted, and having pushed myself so hard leaves a painful feeling lingering over a game that I’m otherwise quite proud of.

So what I’m gonna take away from this is that polish beats content, treating myself so badly for a deadline isn’t worth it, and I should try to have fun. This goes with the last game jam I did as serving a valuable lesson about the industry to me, and I’m gonna take it to heart.